Another month has nearly passed us by and the winter continues to beat on our door. The Munster Schools League was a great success for our West Cork Teams with Schull Community College taking the overall title. It was delighted to have Sam Coughlan return to the fold as he took his place on the A Team and he made an important contribution. The team won 5/1 and 6/0 over the opposition which was impressive. The B Team continues to gain experience and our regular trio of Alex, Liam and Jeanie were joined by Steve McSweeney. The C Team was made up of three first years, Milan, Lewis and Tadgh who all used to train regularly at Goleen but who have slipped away from regular training. Jamie Diaz a Spanish student over with us for the year and who has regularly attended school training made up the team. It appears the event caused a bit of interest with a number of others who are now considering joining the school club on Tuesdays but we will have to wait and see and if they do I will have to organise some challenge match with Mercy Heights or Bandon Grammar.

Lissagriffin NS also took part with Erik, Jasmine, Aaron and Suki, a family affair! This is probably the last Munster Schools event the school will take part in as there will only be 8 students in the whole school next year. It is such a shame on so many levels as Lissagriffin is a great school all 4 of my kids have really enjoyed it and with great facilities and space to run around in it will be a shame to see it close.
.
Bantry Gaelscoil also sent a team with Donal, Cathal, Conor and Jayce. They finished 3rd in the 3rd Division, probably in a division too high but they were following on from last year’s team who were a bit stronger, still they are improving and with both Donal and Cathal regular members of Bantry TTC I hope to see an improvement in them over the rest of the season.
.
The actual event was so much better from last year’s. I had much more positive feedback from our schools taking part, last year it was chaos with no one really knowing what was going on. A couple of new changes were implemented restricting numbers and reducing matches and I think all in all everyone had a good day.

My second trip to Limerick went off really well, even though I fins 6 hours of coaching very demanding and this time without the help of Mair. We had a significant number of girls attending this time which was always the intention and the schools show a good level of interest. There is a 3 way inter-school challenge scheduled for next Tuesday which is a good sign that the schools are interested and I have been asked to run a challenger for the players as part of the WIS course. It will probably have to take place after Christmas but with a charge of €5/player being imposed the schools might just decide to do their own thing. Unfortunately none of the schools sent a team to the Munster Schools League but I am hoping they will next year.

Mair, James, Niall and Erik are all off to the Ulster Open this weekend. It works out as an 8 hour drive for me which is demanding to say the least. I have this trip on the calendar every year and even though the event has much improved with more matches for the players I can’t say I look forward to that drive! With some of the players entering the senior, U21 and doubles events as well it works out pretty expensive. Thankfully Malcolm & Shirley who are regular visitors to Crookhaven have put us up for the last couple of years and that is a huge help in cutting the cost. We will be travelling up on Thursday after school so the players will not have to play after an 8 hour journey. Last year James reached the U15 Boys final which I was particularly happy about as in the past Ulster has proved to be a difficult tournament for the guys. Mair and James are playing Mixed Doubles, I just hope they don’t kill each other in the attempt!
.
Mair was up at the National Training Camp last weekend, this is always an expensive undertaking with accommodation and travel expense and I personally find it difficult to fill in the day while she is training from 10am-6pm. However I was delighted that she came away energised from the camp. Mair likes the social side of the sport and she is finding that she gets the opportunity to do just that at these camps, meeting people and sharing experiences. She is one of the oldest players on the camp with this being her last year as a junior, but I am so glad that she is having such a positive experience and she tells me the format is much improved and she has got some great training. 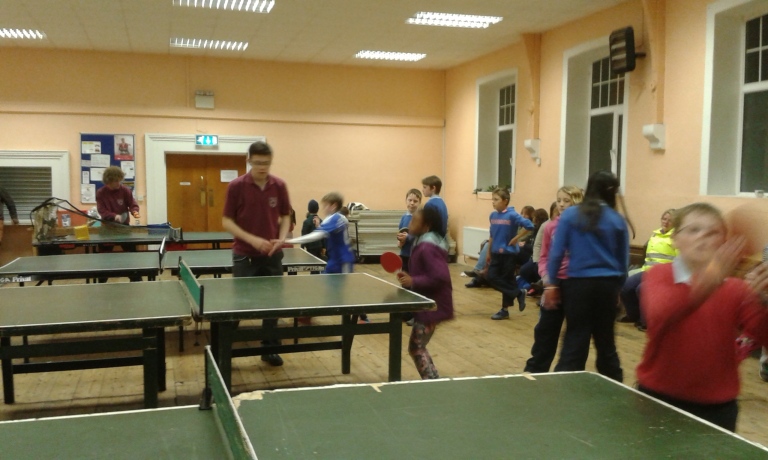 Back in West Cork things are going well. Numbers at Abbeystrewry continue to increase and with 5 new girls coming last week I feel we are making real progress. James and one of his friends from school have started helping out with the coaching and we have a number of parents showing interest in helping out as well. I am thankful for that as we had 24 players last week and on 4 tables it is a challenge to keep everyone involved, especially as we have a couple of very young (5yrs olds) wanting to join in. Everything is fairly basic at the moment but if I can maintain this level of interest I feel there is real potential to establish a coaching system.
.
We had a couple less at Bantry TTC this week, some of the older ones failed to show, which wasn’t a bad thing as I was able to concentrate a bit on the beginners and we had a couple of new ones turn up out of the blue. The rankings are the main attraction and I try and fit in a bit of coaching around the matches. Jasmine and Suki train in Bantry and I am seeing some real progress with the girls.
.
I have one of my nephews Lee, playing in Goleen and he has come on leaps and bounds over the last few weeks along with one of his friends Killian. We don’t have that many training in Goleen so they do get loads of attention and my wife Kate helps out and has a great rapport with the young ones. I don’t know how to increase interest in the club, with so many tables available it would be rewarding to see more players coming through.
.
It looks as though my plan to go to the Cardiff Grand Prix in December will have to be shelved both Mair and James are involved in their school play and that is on at the same time. James is also very busy with his basketball which he loves and appears to be really good at. He loves the team aspects of the sport and feels he can make a positive contribution. They have a semi final of a championship coming up and so his training for that is very important to him. Certainly the fitness side of things helps his table tennis and I am delighted he can manage to fit both sports into his busy routine.
.
That’s about it for this month, I have a session with Gaelscoil this afternoon before setting off to Lisburn and the Ulster Open and we have the next Munster Ranking on the weekend of the 5th/6th December at Leeside. I have a regional Special Olympic meeting in Mallow on Monday which after driving back from Ulster I don’t know if I’ll manage and another Munster Branch meeting needs to held before next weekend. Another busy time ahead!